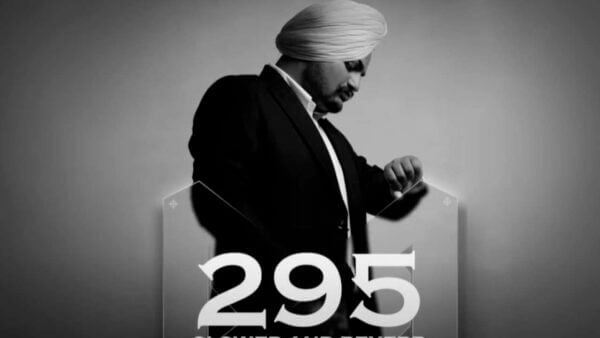 Sidhu Moosewala’s life path came to an abrupt and unexpected end while driving a Mahindra Thar on the roads of Punjab. The demise of one of the most gifted performers to ever emerge from the state of Punjab has struck a severe blow to the Punjabi music industry. He breathed his last in a hospital bed in Mansa on 29 May 2022(29/5).

It could be a coincidence, but Sidhu Moosewala died on May 29 (29/5). And one of his most well-known songs is titled “295”. Many people believed that 295 was Sidhu Moosewala’s best effort to date. For the single, the usually fierce lyricist toned it down and vomited out some facts in a plain manner.

295 was released on all platforms on July 14, 2021,it currently has more than 127 million views on YouTube. This song is also one of the most-streamed songs by Sidhu Moosewala on several other streaming services. It was the second-to-last track on the Moosetape album by famed musician Sidhu Moosewala.

Sidhu Moosewala tackles a range of themes in Chapter 295. Including Punjabi culture, the sleazy politics of the government, mind tricks performed under the pretext of religion. And the true face of the media and society as a whole. Not just the general public and admirers, but also the artists themselves, described it as a severe slap to society.

However, the great pen will never write again, and we will never hear from Sidhu Moosewala again. Both of these things are not possible. The Punjabi entertainment industry lost one of its all-time greats. The current generation lost one of its best, fans lost their idol, and a mother and father lost their son. Songs like “295” will always make us wonder what Sidhu Moosewala is. A man of enormous talent, could have accomplished if he had lived his life to the fullest extent possible. And been given the opportunity to realise all of his potential.The role of Sidhu Moosewala’in the industry cannot be replaced by any other singer.