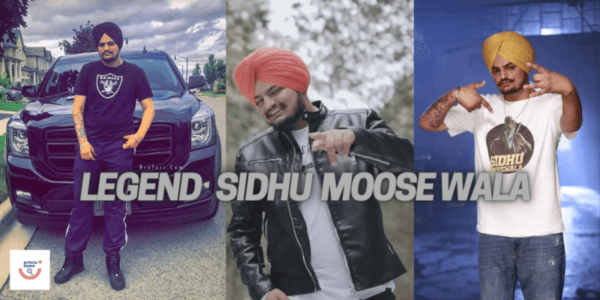 Who is Sidhu Moose Wala?

He was a singer, rapper, songwriter and actor in Punjabi Industry. He was a politician belonging to the Indian National Congress political party. Sidhu hailed from the village of Moosa in Mansa district of Punjab, India. Sidhu was born in a Sikh family, to father Balkaur Singh and mother Charan Kaur. He studied at Guru Nanak Dev Engineering College, Ludhiana and graduated in electrical engineering in 2016. Then he went to Canada for further studies. Sidhu started listening to hip-hop music when he was studying in 6th class. Tupac Shakur was his Idol, Sidhu revealed this information in an interview. Sidhu learned musical skills from Harvinder Bittu in Ludhiana.

How Sidhu Moosewala became a Singer

Sidhu always wanted to become a singer but he has no writing skills at a young age. In his college days, he met a songwriter and Sidhu tell him he sing good and he want a song to make his debut in the music industry. One day the writer called Sidhu and said to come to his village and then they talk about the song Sidhu pick his splendor bike. So he went to the writer’s village. When Sidhu was standing near a bus stop in the writer’s village. Sidhu called the writer and said bro came and meet me at the bus stop. It was a rainy day. The writer replied it’s a very rainy day today. I couldn’t meet you today, come another day.  At that time Sidhu’s heart broke and he decide that he will write his own song and never sing another artist’s written songs.

Sidhu’s hit Song as a Writer

After that Sidhu starts writing songs on his own. It was difficult at the start but Sidhu eventually start writing good songs after trying many times. After that, Sidhu gave one of his own written song a Punjabi Singer Ninja. And when Ninja drop the song named “Licence” the song become very popular with the masses. That’s how Sidhu make his debut as a songwriter in Punjabi Music Industry in 2016 as College Student.

In the same year, Sidhu moved to Brampton, Ontario, Canada for further studies. He does his studies and also did work on his singing. In Canada, Sidhu meet Deep Jandu a Music Producer and then Sidhu release his first song “G-Wagon” in 2017. It was a duet song featuring Gurlez Akthar. This song did not get much popularity.

After that Sidhu released his second song “So High“. Sidhu is the writer and singer of this song. This song gave Sidhu huge popularity. Then Sidhu never looked back and gave so many hit songs like “It’s all about you“, “Just Listen“, “Issa Jatt” & many other songs.

In August 2018, he launched his first film soundtrack song titled “Dollar“, for the film Dakuaan Da Munda. In October 2018, Sidhu released his debut album PBX 1 in the pop music genre with a touch of hip-hop. It won him the Best Album Award at the 2019 Brit Asia TV Music Awards, where Moose Wala also won Track of the Year for “Legend“, Best International Male Act and Best Lyricist. In 2019, Sidhu founded a record label of his name and released numerous tracks on the record label.

In September 2021, he performed at the Wireless Festival in London with British rapper Mist. Sidhu was the first Indian singer to perform at this festival. In April 2022, Sidhu released his debut Ep No Name featuring AR Paisley, Mr. Capone-E and Sunny Malton.This debuted in Top 100 on Billboard Top Canadian.

Sidhu has a feud with many Punjabi singers but his feud with Karan Aujla is very famous among the masses. The feud started when Sidhu targeted Aujla in a video. Aujla see that video then Aujla called Sidhu and said that he with the of his friends will beat Sidhu during live concert. Then Sidhu replied if you have courage then come and beat me.

Elly Mangat resolved this matter. Because Elly Mangat is a common friend of both Sidhu & Aujla and also a famous Punjabi Singer. While doing an interview with Prime Asia T.V. Elly said that Sidhu did not want to hurt his feeling. Sidhu was doing fun with his friends and all the things that he said about Aujla. Sidhu said in a funny way. But Aujla takes the words as disrespectful to him

In September 2019, his song “Jatti Jeone Morh Wargi” was deemed inappropriate by Sikh leaders for using the name of Mai Bhago, a 17th-century Sikh warrior woman. Sikh delegations and Akali Dal leaders demanded a ban on the song subsequently lodging complaints against Sidhu in Mansa and Bathinda. Sidhu later apologised on social media. In 2020 two videos went viral on social media in one video Sidhu was doing training to use an AK-47 under the assistance of police officers. In the second video, he was carrying a personal pistol. The Police officers suspended following the incident.

Sidhu was booked under Arms Act on 19 May. After that police began raids to find Sidhu, but police did not find and arrest Sidhu. The case is still running in court. On 6 June 2020, Sidhu was fined by police in Nabha for his car windows were tinted black beyond what was permissible, and was allowed to leave despite being under lookout. Sidhu told the officers that he was already on bail.

In July, he joined the police investigation and was granted regular bail. That month, he released a song titled “Sanju“, comparing himself to actor Sanjay Dutt. Sanjay Dutt was also arrested under the Arms Act.

Sidhu made his debut in Punjabi cinema in the film “Yes I Am Student” under his own production company Jatt Life Studios. His second film was “Moosa Jatt”. His third film is “Jattan Da Munda Gaun Lagya” but till now we don’t know whether the film is complete or not.

On 3 December 2021, Sidhu joined Congress for contesting the 2022 Punjab Legislative Assembly election. In the election, Sidhu gets only 20% votes from the Mansa constituency Sidhu lost to Aam Aadmi Party’s Vijay Singla by a margin of 63,323 votes. Also, Vijay Singla is arrested in the bribe case.

Black day for Sidhu Moose Wala, for his family and for his Fans

On 29th May 2022 at 4:30 p.m when Sidhu left his house in his Thar with his two friends to meet his unwell Aunt in Barnala. When his Thar reached Jawaharke village of Mansa district, at 5:30 p.m. His Thar was a siege by two cars and shooters came out of two cars and start fairing at Sidhu’s Thar. The Shooter’s fired 40 rounds on Sidhu’s Thar and 15 bullets hit Sidhu and he died on the Spot. Before dying Sidhu tries to defend himself by fairing shoot’s on assailants but his bad luck he has only two bullet’s in his Glock. And his firing did nothing to the assailants.

His two friends also got shoot but they survived. After the shootout, the attackers left the scene. People took him to the Civil hospital in Masnsa. But Doctors said Sidhu was brought dead here.

His father was following him because Sidhu did not take his bodyguard with him. Also not goes in his bullet-proof car. After some time a gangster Goldy Brar a member of the Lawrence Bishnoi group took the responsibility for Sidhu’s assassination. By saying that they took revenge on their friend an Akali leader, Vicky Middukhera.

On 31 May 2022 Sidhu’s last cremation was done in his village Moosa in his own Fields. Near 1:30 p.m. The police investigation is still going on. Police arrested many suspects in this case. They said that Sidhu’s assassination was done due to rivalry between two gangs. Although Sidhu was never associated with any gangs in his life. When Sidhu died he was only 28 years old.

At a very young age, We lost a gem, a legend of the Punjabi Music Industry and more importantly very good human being. Despite getting so much fame and money he lives in his village Moosa with his parents. He never sent his fans without meeting with them and taking pictures with them he meet his fans as much as possible. He has done many cancer camps in his village in the memory of his late grandmother and does many other social works. Everyone is hoping that Sidhu will get justice as soon as possible.

Death of One of The Greatest Rapper of All Time